For months, health care workers have been helping patients and each other as the nation battles COVID-19. No matter the storm, health care workers fight as one Click to expand UP NEXT Some have traveled across the country to other cities and towns to assist those in need. It was […]

For months, health care workers have been helping patients and each other as the nation battles COVID-19.

No matter the storm, health care workers fight as one

Some have traveled across the country to other cities and towns to assist those in need. It was the same story 15 years ago when Hurricane Katrina hit New Orleans.

Some of those heroes live in Houston.

Amanda Bergeron had grown up in New Orleans. She had just finished nursing school and was working at Tulane Hospital in New Orleans in 2005.

Ahead of the hurricane, Bergeron packed a bag and headed to work at the hospital.

“Growing up in New Orleans, we’re used to evacuating for hurricanes, and it’s not something completely out of the ordinary but something did feel different this time,” she said.

Katrina hit overnight while everyone was sleeping. Bergeron remembers the hurricane coming through.

“You can hear a lot of wind and the windows were rattling,” she remembered.

The next day, she thought maybe it hadn’t been that bad, but then came all the water.

“It wasn’t until later that afternoon that the levees had broken and the water started coming in and then we started seeing the flooding,” she said.

She and others were in Tulane hospital for five or six days.

“The hospital flooded,” said Bergeron. “The generators, of course, were in the basement so they flooded. So, we were out of water, out of electricity.”

Eventually they were rescued out by helicopter and patients went first. One of the helicopters rescuing patients was from a hospital in Houston.

“We were getting patients from all over, from Tulane, from Ochsner, from Charity,” said Tom Flanagan, the vice president of Life Flight at Memorial Hermann.

They took most patients to a central location in Baton Rouge, where many were taken by ground to others hospitals, including to Houston.

“We had taken on over 200 patients in our system from New Orleans,” said Flanagan.

Trip after trip, crews adjusted their schedules to make it happen.

“Health care workers rise to the occasion,” said Flanagan. “Many times they compromise their own personal lives to come to work and to take care of patients.”

As for Bergeron, her home flooded too. Her family relocated to Houston where they still live today.

She’s now a nurse at Memorial Hermann Hospital. Now, in 2020, she and Tom are now battling another crisis: COVID-19 in the midst of hurricane season.

They’ll tackle whatever comes their way because rising up is what health care workers do.

Thu Sep 3 , 2020
MADRID (Reuters) – Authorities in Madrid shut down a coronavirus testing centre for teachers on Wednesday after large crowds formed outside, while the health ministry diagnosed 3,663 new cases of the virus, down from a peak of nearly 10,000 recorded in Spain last Friday. With the new academic year starting […] 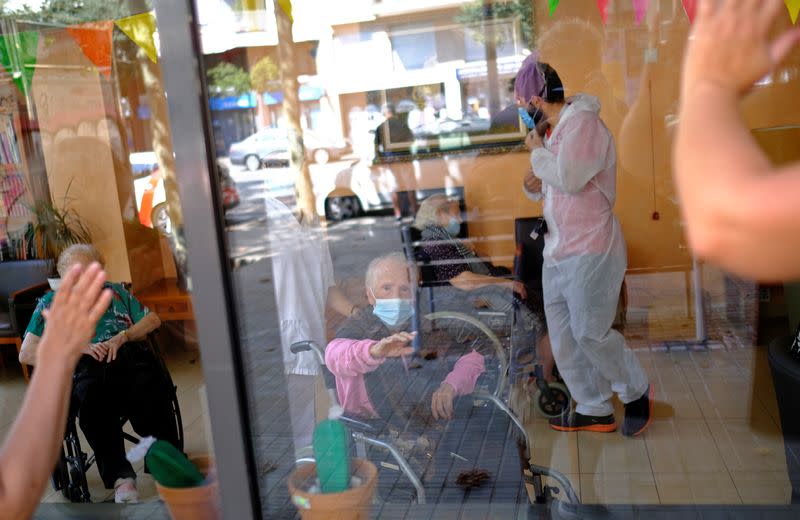