By Jared Brey/Capital & Main Streets flooded with protesters, police precincts in flames, socially distanced lines at polling places, and grim reapers at the beach. In a year full of striking political images, few have been as simple and powerful as pale blue scrubs and a surgical mask. The COVID-19 […]

Streets flooded with protesters, police precincts in flames, socially distanced lines at polling places, and grim reapers at the beach. In a year full of striking political images, few have been as simple and powerful as pale blue scrubs and a surgical mask. The COVID-19 pandemic has highlighted America’s divisions and cast many of its leaders in an unflattering light. But it has also drawn attention to the vulnerability of the country’s frontline workers — none more so than the nurses and home health aides that work in some of the virus’s most severe hotspots, at daily risk of contracting the disease.

The early days of the pandemic were accompanied by outpourings of gratitude to health care workers across the U.S. Now some of those workers are trying to turn their elevated profile into political power. Those efforts could have consequences in swing states during the November elections. In Pennsylvania, for example, Donald Trump took all 20 electoral votes in 2016 despite carrying the popular vote by less than 45,000. By contrast, the number of Pennsylvanians working in health care practice and support occupations is around 750,000, according to the Bureau of Labor Statistics. If even a small share of the growing health care workforce is mobilized to participate in the election, the outcome in 2020 could be different.

The pandemic has already killed at least 821 frontline health care workers in the United States. And as it has wreaked havoc on hospitals and nursing homes, Pennsylvania health care workers have been focusing on immediate needs like personal protective equipment (PPE), hazard pay and stronger workplace safety regulations. But they’re conscious, too, that their influence is on the rise, and they’re strategizing how best to wield it.

“I think there’s probably some more acute listening than there has been in the past,” says Matt Yarnell, president of SEIU Healthcare PA, the largest health care worker union in Pennsylvania.

Yarnell, a former nursing home worker, recalls the sense of devastation he felt on election night in 2016, and he can still recite from memory the 44,292 vote differential between Trump and Hillary Clinton. To him and other leaders of health care unions in Pennsylvania and around the country, putting energy behind an effort to defeat Trump in November is not a hard decision. At the same time, Yarnell says he’s sensitive to the political diversity of SEIU Healthcare PA’s membership, and wants to keep the union’s effort focused on its core demands, which include short-term workplace improvements as well as a broader agenda of “unions for all” supported by the 2.1 million member international union.

“We have very progressive members, we have very conservative members, and our union looks a lot like the statewide footprint of the Commonwealth [of Pennsylvania],” Yarnell says. “We want to be in a position where we’re not telling people who to vote for but really creating the clear analysis of where we are.”

Union leaders are aware that the pandemic, and officials’ responses to it, have amplified the deep polarization in American politics. Months ago, SEIU Healthcare PA held “crisis calls” with state lawmakers about the coronavirus outbreak. Despite inviting the entire Republican caucus, which controls the state legislature, only about half a dozen participated, Yarnell says. Still, some Republican state legislators have supported specific workplace-safety bills this year. It doesn’t always pay to be overly partisan when pushing for specific changes.

Strictly speaking, union endorsements rarely make or break a campaign anyway. In Philadelphia this spring, SEIU Healthcare PA and the Pennsylvania Association of Staff Nurses and Allied Professionals (PASNAP) both endorsed incumbent state Sen. Larry Farnese over progressive challenger Nikil Saval. District 1199C of the National Union of Hospital and Health Care Employees endorsed Saval, who won the race. Saval says he heard anecdotally that a lot of nurses and home health aides in the district supported his campaign even though their unions may have endorsed his opponent.

Saval, part of a generation of rising stars who identify with democratic socialism, formerly helped organize demonstrations with the hospitality-workers union UNITE HERE and worked on the Bernie Sanders campaign in 2016. He says he hopes to push legislation in the state senate that could make long term care more affordable and help more health care workers unionize. (He doesn’t face a challenger in the November general election.) There are enough health care workers in Pennsylvania to sway elections and public policy issues if they can work together, he says, noting that the University of Pittsburgh Medical Center is the largest employer in the state.

“If there is a bloc of health care workers who, based on their experience in the industry, clearly see the failure of leadership at the state level from their representatives and at a national level, that would be critical,” Saval says.

In Pennsylvania, health care practitioners and technical workers earn an average salary of $77,730, while those in support occupations earn just $29,760.

There are steep class divisions within the health care workforce. According to the Bureau of Labor Statistics, there were 3,253,000 home health aides and personal care aides working in the U.S. in 2018. And the field was expected to grow at a much faster rate than the average industry workforce, with as many as 1.2 million new jobs by 2028. But home care workers are poorly paid, with an average salary of just $24,000 a year, or $11.57 an hour, according to the Bureau. Home care workers are organized under a group called United Homecare Workers of Pennsylvania managed by SEIU Healthcare PA and AFSCME, but state law prevents them from bargaining collectively. In Pennsylvania, health care practitioners and technical occupations earn an average salary of $77,730, while those in support occupations earn an average of $29,760 a year, according to Bureau of Labor Statistics data.

But there is potential for health care workers to create common cause with each other and with workers in other service sectors, says Gabriel Winant, a labor historian at the University of Chicago. The coronavirus pandemic may be accelerating a process of “class formation” within and between those workforces, Winant says. And if people who work for the health care system can identify more common interests with each other and with larger populations that rely on the health care system, “it’s difficult to see how that doesn’t take on some degree of oppositional consciousness.” That could take any number of forms, including the relatively easy act of voting, Winant says. Perhaps especially in a swing state like Pennsylvania.

“Health care and social assistance as a share of the workforce is very clearly largest in deindustrialized places,” Winant says. “So to the extent that this workforce is politically significant, it also maps onto Rust Belt geography.”

Maureen May, PASNAP president and full-time nurse at Temple University Hospital in Philadelphia.

During the Democratic presidential primary, some health care unions like National Nurses United came out strong for Bernie Sanders and Medicare for All. In Pennsylvania, the nurses in PASNAP have voted to support Medicare for All as well. And the union still supports that policy with Joe Biden as the presumptive nominee, says Maureen May, PASNAP’s president and a full-time registered nurse. Despite the association of Medicare for All with the progressive left, May says it’s an uncontroversial position within her union, even among politically conservative members in rural areas.

“There’s plenty of profit in the health care system which can be changed into care,” May says.

PASNAP’s political action committee hasn’t gotten very far with its plans for the general election, May says. Anyway, she notes that nurses have consistently ranked among the most trusted professionals in the United States, and it doesn’t make sense to get too tied in with any individual politician (whose profession ranks among the least trusted). In Philadelphia, Chris Woods, the president of District 1199C, which represents thousands of nursing-home workers, says his phone was lighting up with messages from friends and relatives with questions about COVID-19 in the early days of the pandemic. The union has lost members to the disease.

“This pandemic put us right in the center of everything,” Woods says.

In the last few months, the union has fought for employers to provide PPE and hazard pay. District 1199C has also organized 120 behavioral-health employees at Delaware Valley Residential Care into the union, and applied to represent nonprofessional employees at Einstein Medical Center. And the group is going to work to make sure all of its members know where and how to vote in November.

No one is taking anything for granted, even as polls show Biden with a solid lead in Pennsylvania at the moment. And even if Pennsylvania flips blue again, there’s still a long road to recover from the damage the pandemic has done.

“I believe that we can make a difference after this COVID crisis,” says May. “And I hope the public remembers.”

Wed Oct 21 , 2020
It was on a Saturday in mid-March when Abby Schiff, then a third-year medical student at Harvard working through surgery clinical rotations, found out she wouldn’t be going back to the hospital. She had worked the day before, but with the coronavirus threat growing quickly, Schiff, like thousands of other […] 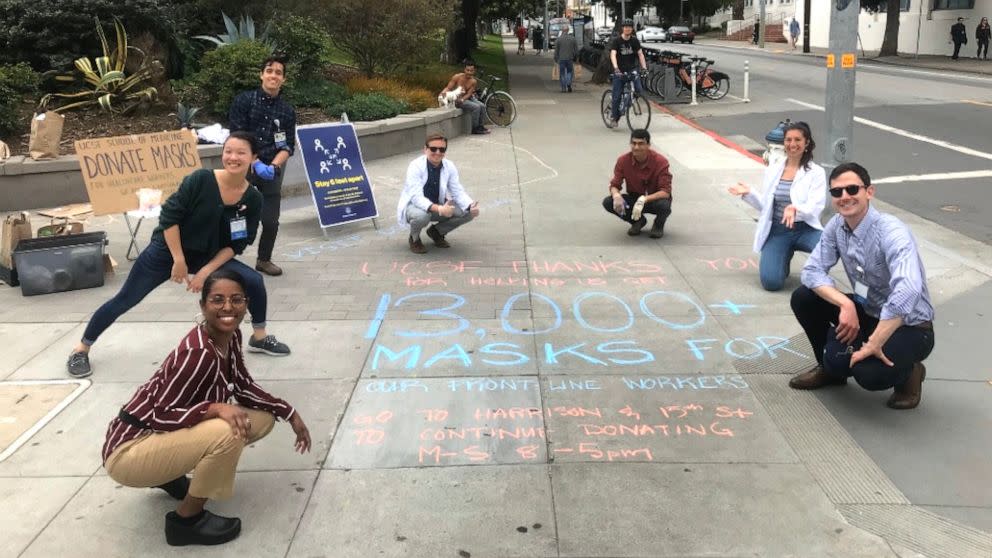